Musical Clock with Spinet and Organ 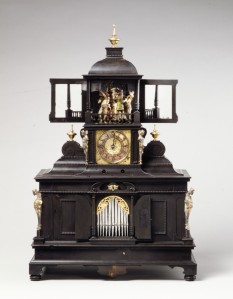 This musical clock was built in Augsburg, Germany in about 1625 when the southern German city was a hub for clockwork and musical automata trades, as well as jewelry and other musical instrument trades (Ord-Hume, 1984). The case is fashioned of ebony and houses “an extremely rare and important instrument consisting of a sixteen-note pipe organ and a sixteen-string spinet that may be played independently of the organ” (Moore, 2003).

This instrument was built by Samuel Bidermann, his son (also Samuel), and Veit Langenbucher. According to Ord-Hume, “the Bidermann family was closely involved in the making of musical automata including automatic spinets and there is evidence that the family co-operated with other members of automaton-making families such as the Langenbuchers and the Runggels” (1984: 10).

The musical clock in the Metropolitan Museum of Art gallery of instruments includes, “in addition to the organ and spinet, a clock and five carved and colorfully clad commedia dell’arte figures that perform a circling dance in the clock’s tower when the instruments sound to mark the hours” (Moore, 2003). It is believed this particular musical clock is the “most musically elaborate automatic instrument” to survive from the 1600s, and it features three airs that were likely composed by Hans Leo Hassler (Moore, 2003). According to Ord-Hume, “the couched harp or spinet was developed in the seventeenth and eighteenth centuries. These early string instruments featured just one string to each note. The first application of the pinned barrel to their playing seems to have come at about the beginning of the seventeenth century” (1984: 9). Hassler was the elder Bidermann’s teacher and an expert on pinning barrels (Ord Hume, 1984; Moore, 2003).

After the creation of this musical clock, and after the deaths of both Samuel Bidermann, Sr., and Veit Langenbucher, Bidermann’s two sons, Daniel and Samuel, Jr., sued the Langenbucher family in 1647. The Bidermann brothers accused the Langenbuchers of stealing their plans and creating musical automata in their style. The suit also stated that the Langenbucher defense claimed Hans Leo Hassler did not compose the majority of the music featured in the Bidermann and Langenbucher instruments, though this fact has been deemed incorrect (Groiss, 1980). It is interesting to imagine these families feuding after the deaths of the patriarchs who apparently worked together to create this particular musical clock.

A note about provenance
This musical clock was created in Augsburg, Germany and previously owned by the now-closed Time Museum in Chicago. It was purchased by the Metropolitan Museum of Art in 2002 from the Clara Mertens bequest, in memory of André Mertens.

References
Bowers, Q. D. (1972). Encyclopedia of automatic musical instruments (pp. 348–359, 430–431). New York: The Vestal Press.
Though this encyclopedia had someone limited information about the musical clock at the Metropolitan Museum of Art, the information about the creator, Samuel Bidermann, led me to a book by Arthur W.J.G. Ord-Hume. Ord-Hume has written prolifically about automatic pianos, their history, and their creation. For that reason, this encyclopedia proved extremely useful.

Flechon, D. (2011). The sound of time; the spring, a new source of motive power. In The mastery of time. Paris: Flammarion.

Groiss, E. (1980). Automatic music: The Bidermann-Langenbucher lawsuit. In K. Maurice & O. Mayr (Eds.), The clockwork universe:
German clocks and automata 1550–1650. Washington, D.C.: Smithsonian Institution Press.
Though this reference does not talk specifically about the musical clock at the Metropolitan Museum of Art, it does shed light on the German musical clockmaking trade and the prominent craftsmen who dominated it. Groiss details a 1647 lawsuit between Samuel Bidermann’s two sons, Daniel and Samuel, Jr., and the Langenbucher family. The Bidermann brothers accused the Langenbuchers of stealing their plans and creating musical automata in their style. It is surprising that, within a generation of the collaboration that created the clock, the creators’ families would be feuding.

Ord-Hume, A. W. J. G. (1984). Pianola: the history of the self-playing piano. London: George Allen & Unwin.
This book was especially useful because it gave detailed information about the creators of the automaton musical clock, Samuel Bidermann, his son Samuel Jr., and Veit Langenbucher. There was also information about Augsburg as a center for trade, especially of clocks and musical instruments, and about the rarity and collectability of automata spinets.

Winternitz, E. (1968). A spinettina for the Duchess of Urbino. Metropolitan Museum Journal, 1.

2 thoughts on “2 Musical Clock with Spinet and Organ”

Scientific publications editor and archivist at the American Museum of Natural History with a Master of Science in Library and Information Science from Pratt Institute. New York City enthusiast.